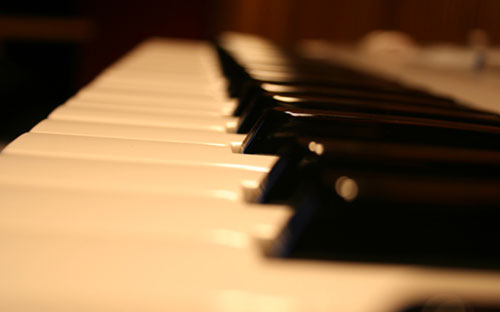 With the arrest of Rosa Parks in Montgomery, Alabama, and burgeoning Civil Rights Movement as a backdrop, a mixed-race Rhythm and Blues band The Rhythm Kings-made up of 16-year old Peekskill High School students--rehearse for a talent show at that Hudson River city's Paramount Theater. A "win" here could bring them an appearance on Ted Mack's Original Amateur Hour--the American Idol of its day. The play is based on a true story and takes place in 1955, just six years after the infamous "Robeson Riots" that took place in Peekskill.

The Rhythm Kings--white Italian Vinnie on tenor sax, Black Dolores on piano, Black Elvin on bass, Black Bootsie on drums, and Black Johnny on trumpet--rehearse for the talent show. It is the introduction of characters, with banter, stories, strengths and weaknesses exposed and dreams and fears explored. In addition, of course there is the music.

The Peekskill Talent Show at the Paramount Theater. The band plays three original songs in a concert-like setting. Vinnie pulls a theatrical stunt with his saxophone on the last song and the band wins the contest.

INTERMISSION End of Act One

At Ted Mack's studio in New York City. Two worlds collide, the naive and the cynical, as the band, acknowledging they have given a great performance, await the results. They are given an offer by a sleazy music agent--which they turn down (but reluctantly)--before Vinnie is called into the Ted Mack office (as the rest of the band waits in another room) and informed by the Ted Mack representative that America--and certainly its show business flag ship--just isn't ready for "your kind of band." Vinnie protests, but ACT II ends with a tortured Vinnie making the long journey (in song) across the stage wondering how he will tell the band that it's over.

The 50th Class of 1956 Reunion at Peekskill High School. Vinnie and Dolores reunite for the first time in fifty years, play a song together and reminisce about the other Rhythm Kings. Elvin walked away from his marriage to Dolores and settled in the world of progressive jazz, Bootsie was killed in Viet-Nam, and Johnny disappeared on the streets of New York. The play ends as Vinnie and Dolores break into the song that was their finale at the talent show (Bop 'N Boogie) and are joined on stage by the rest of the band as 16-year olds. One by one, they enter and go out with "Bop 'N Boogie" as THE RHYTHM KINGS!